Chart scales is not a topic that is discussed that often. I guess that everyone has settled in the Arithmetic scales where the chart vertical axis is divided in equal price increments. We could say this is the “normal” scale as is the one used in the majority of charts that you will see online and in the media.

In the Logarithmic scale the vertical axis of a chart is divided in equal price increments percentage. The theory behind being that is more significant to the investor a move of $2 when the underlying security is valued at $10 than when it is valued at $100.

The Arithmetic scale can even be deceptive when analyzing a long-term chart for a security that has experience a significant increase/decline in price over time. It is recommended to use the Logarithmic scale when doing long-term analysis.

Recently, I read some investor’s recommendation to buy AMD. Let’s then use AMD for our own long-term analysis example:

Both charts represent the last 2 years daily candlestick chart for AMD. The indicators included are the XBP Sine Wave, XBP Price Bars and the lower indicator is the XBP Volume Indicator. The trend support lines are drawn in any of the charts and they sync across (you can enable this feature in ThinkOrSwim). To easily identify the trend lines let’s call Trend Line 1 the on that connects the lows of February and November 2016 and Trend Line 2 the one that connects the lows of November 2016 and May 2017.

Trend Line 1 seems out of sync with the 2017 price action, but could serve as a stronger support below Trend Line 2. On the other hand, Trend Line 2 seems to be acted as support in the recent days and that price is bouncing off from it. We could easily recommend a buy action at this moment (as that investor recommendation that I read was suggesting). 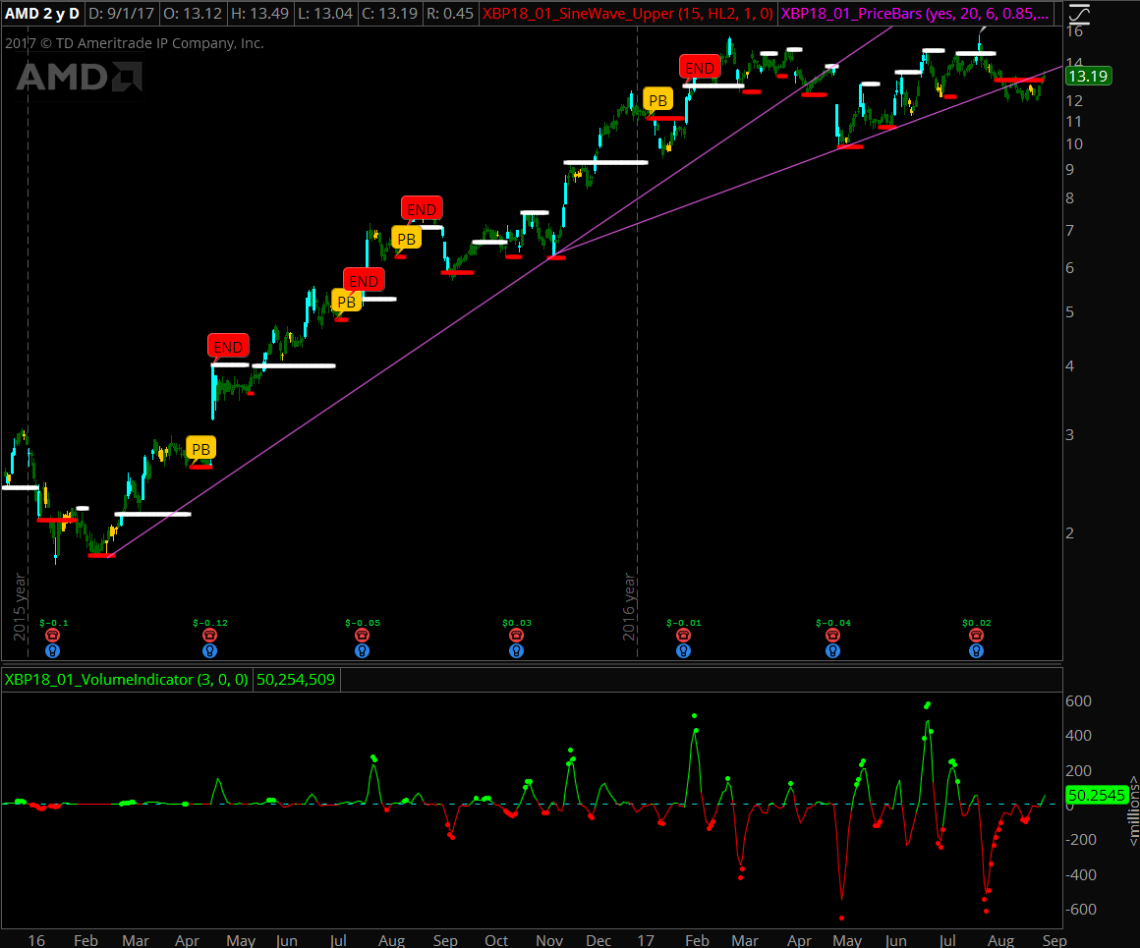 Now, Trend Line 1 explains the gap that occurred at the beginning of May 2017 (from a technical point of view). Trend Line 2 adjusts itself better to the price action that occurred after the gap. Let’s zoom in to see more detail:

We can see that price has moved below Trend Line 2 and even that it closed on Friday 1st of September 2017 right below the trend line forming a shooting star candlestick. Now, we could start doubting about the recommendation of buying AMD right now.

I will monitor the case of AMD and post updates as the story unfolds. What do you think, is AMD a buy, a sell or a wait?