“The art of prophecy is difficult, especially with respect to the future” – Mark Twain

Yesterday, 10th of December 2017 Cboe launched for the first time a Bitcoin futures contract, the BTX. Next week, on the 17th of December, CME will do the same with its contract named BTC. BTX will be equal to 1 Bitcoin and BTC to 5 Bitcoins.

I might disclose that I’m rather interested in the whole cryptocurrency movement and that I’ve enrolled in a 9 weeks online course at B9Lab. You can check their courses here: https://www.b9lab.com/

BlockChain is a log-based database replicated in multiple nodes in a P2P network spread across the Internet. BlockChain groups transactions into blocks and links each new block to its previous block in a very tight and secure way. This series of links creates a chain of blocks, from there the name of BlockChain.

I will not go deeper into the details of BlockChain, but it is important for you to know, that hacking in any form or way the information stored in a BlockChain is extremely difficult and by now extremely expensive as well. Also, BlockChain, due to its distributed nature is not controlled by anyone, cannot be “switched off”, and data is so many times replicated that cannot be lost.

BlockChain has the capability of changing real life processes like paying your rent, buying stuff, sending money to your family, or even how your medical records are stored. Today is already possible for two individuals to send money to each other without the need of a third party, namely a bank. BlockChain, using Bitcoins, Ethers, Litecoins, or any other digital currency, make this possible.

Ok, so what? Why do you explain me BlockChain when what I’m interested in is Bitcoin?

Understanding a bit about BlockChain will help you understand Bitcoin price. Let’s go a bit deeper: As said before, BlockChain stores transactions, for example if you send 1 Bitcoin to your friend, this is one transaction. A sends 1 Bitcoin to B. The transaction is stored in a block, which is linked to its predecessor. The Bitcoin protocol stablished that every 10 minutes there must be a new block added to the chain to store all the transactions happened in the previous 10 minutes. This new block will get linked to its predecessor as well. And this process repeats every 10 minutes.

If a hacker would like to change the transaction that you did to your friend, he will need to hack your block and all the blocks that happened after that one. This is due that the link between blocks is done through an encrypted text dependant on the contents of each block.

In order to change/create blocks, a computer needs to solve a mathematical puzzle that can take an unknown amount of time. For the hacker to be successful his computer will need to outrun the rest of computers creating new blocks, the miners. The hacker will need to change your block and all the blocks after it, plus create a new block, send all the changes to the Internet and pray to be accepted as the new “true” chain of blocks that replaces the previous one. All pretty difficult.

On top of this computing difficulty, there is an economic disincentive. You may have heard of Bitcoin miners. A miner is a computer that is trying to be the first one to solve the math problem to create a new block. I not explain the details here, but this puzzle can take many million of trial and error attempts. Bitcoin, to lure in miners, offers a reward of 12.5 Bitcoin to the miner that succeeds at creating a new block accepted by the Bitcoin network. At today’s average price of USD 16,000 per 1 Bitcoin, the effective reward for creating a new block of Bitcoin is of USD 200,000.

As an added security measure, Bitcoin exchanges are adding an additional layer where your transaction is not confirmed until 6 additional blocks have been stacked on top of your block. Any attempt of altering your transaction will be faced with the task of changing 6 blocks before any other block is added to chain. This is thought to be almost impossible.

At the end, hacking a transaction in Bitcoin is difficult in computational terms and at the same time the hacker could use all that computer power to try to mine “legitimate” Bitcoin blocks for a reward of USD 200,000 per block, as per today’s exchange rate.

But wait there is more…

Those 21 million Bitcoins are expected to be fully mined by 2140. So no worries about it yet. I won’t affect our life-time and by then we will know for sure if crypto-currencies are here to stay or not, and which ones are the winner ones.

The price of Bitcoin

Bitcoin reminds me of gold. Gold for itself doesn’t do much, but we all agree that it has value. If one day we all agree it doesn’t have value anymore, then it will drop in price to never recover again.

It is Bitcoin a bubble? Of course it is. As Gold it is. The problem of a bubble is not on itself, but on how long that bubble will stay. Gold has been a bubble for centuries already. Tulips were a brief bubble in the Netherlands in the 17th century. Will Bitcoin be a long lasting bubble or a short one? That nobody knows, but here is a hint: If the Cboe and CME are issuing future contracts, my bets are that Bitcoin is here to stay.

Thinking about the underlying technology, the more Bitcoin is used, the more transactions happen and the more valuable Bitcoin shall be to protect the system against potential attacks. Hackers shall find more lucrative to mine new blocks that trying, in vane so far, to hack the chain of blocks. An expensive Bitcoin is on the interest of everyone doing transactions with Bitcoin and for the miners themselves. I would even say that an expensive Bitcoin is an intrinsic need for the survival and viability of Bitcoin.

Imaging that one day multi-million dollar transactions could be done using Bitcoin as a public network to exchange money between two entities. Both entities will demand the strongest security possible. Only an expensive Bitcoin can guarantee such security, by making it more profitable to mine new blocks than by trying to hack old transactions. If Bitcoin is here to last, it shall be expensive.

I don’t think so. Indeed the recent raises in value look impressive, but Bitcoin cannot be judged as an average stock. Stocks are traded in the markets after a financial analysis that prices the stock at a certain level in the first day of trading (IPO). Then the market using supply and demand fluctuates the price accordingly, but Bitcoin never went through this process. In my opinion Bitcoin is looking for its price. Could be $10,000 or it could be $100,000. The market will let us know, as it has been doing with Gold for centuries.

Also, in relative terms Bitcoin is still quite small. And for such potential, Bitcoin is even indeed cheap at this moment ($16,000). If Bitcoin is set to become the guaranteed exchange world-wide network that it could be, it better raise in price. 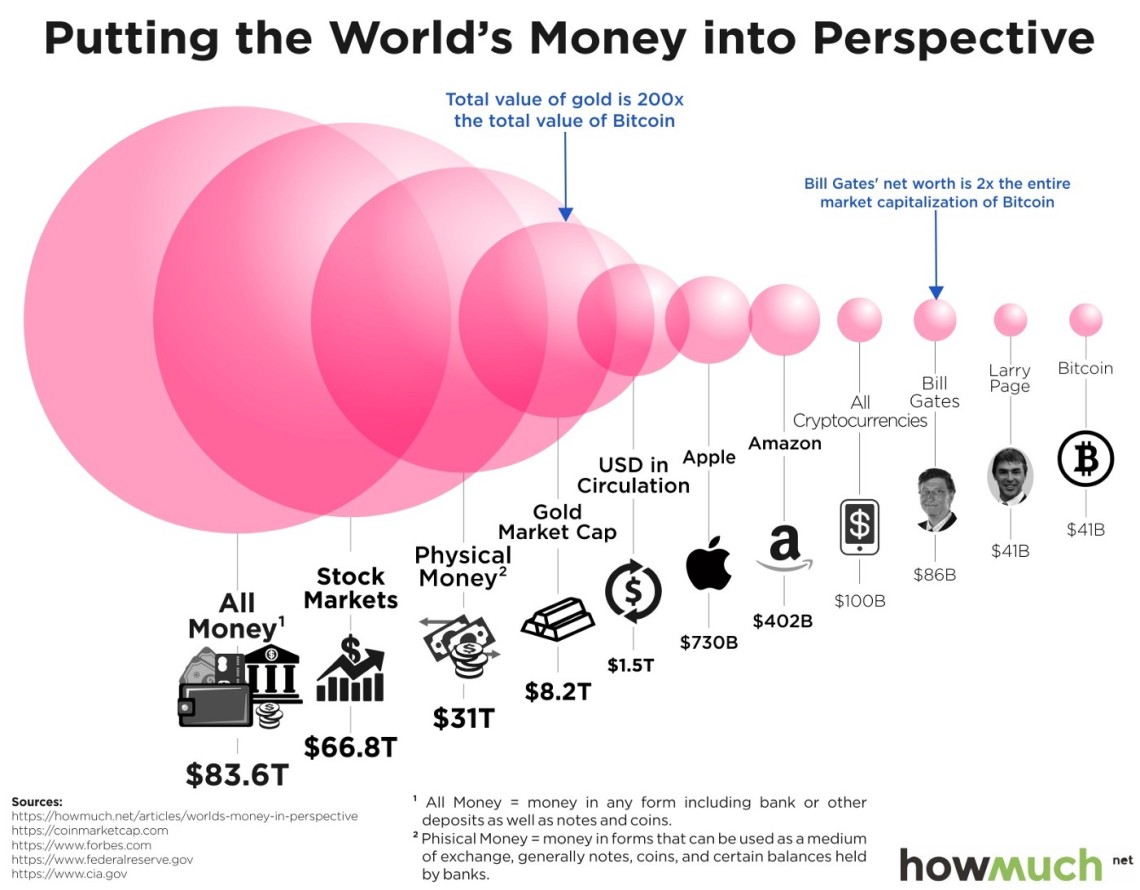 This time is different…

Well, not really. The potential of the technology is different. The connected world of today is different. But bubbles happened before and will continue to happen as long as we humans keep being just humans. We have greed and fear; dreams and nightmares; and an unparallel stubborness and bad memory. I strongly recommend you to read a book about bubbles that will help you to understand what is going on today: Devil Take the Hindmost by Edward Chanceller.

In his book, Chanceller analyzes the financial bubbles occurred since the crisis of the Tulipans in the Netherlands to the Japanese real-state bubble. You will see how bubbles are born, matured and burst and you will gain perspective on today’s events on Bitcoin.

You have 2 ways to buy Bitcoin or any other major digital currency (mainly Ethereum and Litecoin). You either have a “wallet” or you open a trading account with an exchange.

A wallet can be opened in few minutes and allows you to buy and sell Bitcoin using just your debit or credit card. The exchange rates a bit against you compared to the trading accounts, but we could say that wallets are easier to setup and to operate. Also, a wallet is required if you would like to send/receive money from other people and if you would like to pay anything using Bitcoin.

If a friend of mine recommends me a wallet, I would say ‘coinbase‘. It is easy to setup and to operate. You can link your account with your debit/credit card as well as with your bank account.

There are several (in my opinion too many) exchanges avaiable today, but luckily Cboe and CME have already done some work for us and the valuation of the future contracts will be based on the following exchanges: Bitstamp, GDAX, itBit and Kraken.

Again, if a friend would ask my advice, I will say go with Kraken. It is famous, well funded and above all it is easy to setup and operate with. As you can see I put a special emphasis on easy of use. For me, if it is too complicated, it will turn away less tech-savvy users, and you want to put your money with a robust exchange backed by as many investors as possible.

That’s all… for now

I hope this post helps you understand Bitcoin a bit more and to get onboard of this amazing new technology.